IF ONLY: why social-emotional learning matters so much …

Home/Blogs, Relationships, Resources, Wellbeing news & information/IF ONLY: why social-emotional learning matters so much …
Previous Next

IF ONLY: why social-emotional learning matters so much … 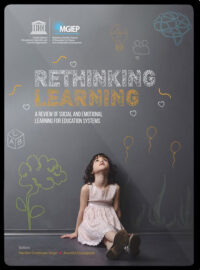 On July 18th UNESCO MGIEP (the Mahatma Gandhi Institute for Peace and Sustainable Development) is launching Re-thinking Learning: A Review of Social-Emotional Learning for Education Systems. It is a much needed and welcome publication that addresses both research and practice.

Social and emotional learning (SEL) enables people to identify and navigate emotions, develop pro-social behaviour and consider what gives life meaning. It is important for individuals and their relationships but also for the sustainability of the wider world.

As Matthieu Ricard says in the foreword, this is about having “meaningful guidance on becoming a good human being — happy within and benevolent without”.

I have lived with this work for decades within the wider realm of whole-child whole-school wellbeing, including developing the ASPIRE pedagogy to make SEL a safe and solution focused intervention. I am one of several authors on one of the chapters. Rather than focusing on the theory, research and practice as described in the book, however, I have been thinking about the difference SEL might have made to someone I cared about – my first husband and father of my children. He died over ten years ago, an unhappy and lost soul.

Joe was a good man – he cared about justice, human rights and poverty, and on one level was really kind. He stayed up all night once to drip feed milk to an abandoned kitten. I was nineteen when we first met and naïve about politics. He was a little older, already a teacher and an avid Guardian reader. I was in awe of him and he taught me a lot.

But Joe’s life was plagued by his inability to understand his feelings. This impacted on his attitude to everything, including himself, how he related to others, and the ways in which he communicated with those close to him – or rather did not communicate. He loved his work in education when pupils wanted to learn, but was unable to respond flexibly with those less motivated or non-compliant, lumping them together as ‘louts’. He had not learnt the basics of constructive problem solving, so anything challenging was overwhelming.  Joe’s sense of self was too fragile to reflect on what he might have done differently in any given situation so blaming others and being the victim became his way of being. Every one of his close relationships foundered – including with me. We separated after 7 years of marriage.

Joe grew up in a rural English village where his parents were stalwarts of the church. They were kind, thoughtful and generous people – but no-one ever talked in the family about important issues. The state of the world certainly, but never the personal. Not the cot death they had experienced before Joe was born, not his sister’s teenage pregnancy nor her subsequent mental health problems, not why a cousin’ s marriage had failed. Grief was buried, embarrassing difficulties side-lined, and misdemeanours simply condemned without understanding. Maybe it was a generational thing but this way of being has wide repercussions. 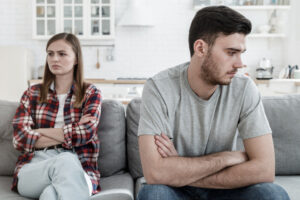 Given this background, it isn’t surprising that Joe was uncomfortable with his emotional self. Expressing love was all but impossible for him and he avoided eye-contact when trying. He had little conception of strengths-based language, so although able to talk at length when things were not going well or he felt hard done by, he rarely commented directly on what was right, nor what he valued in someone. At his funeral several people came up to his two grown children to say how proud their father had been of them. They were surprised – he had never said that to them.

Joe could laugh easily in a social situation, but otherwise not express joy or even satisfaction. He was easily irritated and at times that tipped over into anger. After a second disastrous marriage Joe contracted primary progressive multiple sclerosis. He bore this dreadful disease with some courage, and because he was a loyal and generous friend, many stood by him until the inevitable end. He had great qualities which is why it is so desperately sad that his life had such gaping holes.

I often wonder what would have been different if SEL had been on the curriculum and threaded through Joe’s experience at school. He would have learnt a wide vocabulary for feelings and practiced using these in hypothetical situations. He would have been able to acknowledge and value his own strengths of character and those of the people around him. He would have learnt that being thankful for small things helped staved off depression and that there was a skill to problem-solving that offered a sense of competence rather than frustration. Most importantly, he would have learnt the importance of human connection and how to talk more easily and positively with those close to him – and not been afraid of that closeness.

Joe is not the only person whose family was unfamiliar with what we now call emotional literacy and who experienced a similar education. Family breakdown is commonplace, many resort to drink or drugs to change how they feel, and unresolved conflict is in the media on a daily basis.

SEL matters for individuals and the world they create at least as much as academic subjects, possibly even more. It is the difference between being at the mercy of what life throws at you and having some control over how you respond. It is about seeking the positive, not stereotyping people and most importantly, providing a foundation for what is at the crux of happiness or misery – the health of our relationships. Joe is just one example of what might happen when you don’t learn these things – his life would have been so much better if he had. We owe it to all our children to give them the best possible chance of flourishing in all dimensions of their being. SEL needs to be at the heart of education in every school, everywhere.

Dr Sue Roffey FRSA FBPsS is a psychologist, academic, author, activist and speaker. She holds posts as Honorary Associate Professor at University College, London and Adjunct Associate Professor at the Western Sydney University, and also affiliated to the Wellbeing Institute at Cambridge University. She is a member of the Advisory Board of the Carnegie Centre of Excellence for Mental Health in Schools, and was a member of the Editorial Board of Educational and Child Psychology.