What about ME? – a warning for parents

Home/Blogs, Growing Great Kids, Relationships/What about ME? – a warning for parents
Previous Next

What about ME? – a warning for parents

Jane, an old childhood friend, is now going through her third divorce. Understandably she is distraught, and in one of our heart to heart sessions she cried out in real pain “what did I do wrong?” It was not helpful to talk about this in the midst of such distress, but it is clear that the seeds of these relationship breakdowns were sown in the very early years of her life.

Jane was a pretty and much loved child. Her parents, especially her father, adored her, and she could do no wrong in his eyes. Within the family budget, Jane was given everything she asked for and she responded with smiles and cuddles, reinforcing the idea that she only had to be cute to get anything she wanted. Very little was asked of her in the family home, including when she moved into the teenage years. If Jane was upset, her father would find another person to blame rather than ask what she could have done differently. There was much love and affection but low expectations, no demands and few reprimands. It was a peaceful household because Jane was rarely, if ever challenged. She was a gentle and pleasant girl, growing up to be a middle of the road student who eventually got a place in college. At 21, Jane’s parents considered they had done a pretty good job. And any outsider would probably think the same. But this parenting style so many years ago is at the root of their beloved daughter’s present misery – and we see similar interactions in many families today. For children to grow up to have optimal wellbeing, one way love is not enough.

What Jane had not learnt during her childhood was how much other people matter, and that sometimes you have to go out of your way to put them first. Her modus vivendi in all her relationships has been ‘what’s in this for me?’ Although warm and responsive – and often great fun to be with – Jane is primarily self-absorbed. Not selfish exactly, as she often gives her time for community projects and remembers birthdays. Although she is interested in the lives of others, it is from a distance. It is as if she does not know how to get her hands dirty doing things for others in a relationship without expectation of some personal benefit. She has not twigged that generosity of time and effort can be its own reward. Little gifts are nice to unwrap but do not count for much in the health of a relationship, unless they are part of a wider practice of thoughtfulness and loving gestures. In this current crisis – as in all the ones previously – Jane has only ever talked about how hard things are for her, not the impact on her partner. Nor has she asked what is going on for her patient, listening friends, many of whom are experiencing their own challenges.

Jane does not seem to have learnt that all successful intimate relationships operate on the basis of ‘we’ rather than ‘me’. This means decisions being made together on what is best for both of us, understanding that although equality is important sometimes one person needs extra support – and giving that willingly without a second thought about whether it is ‘fair’. It is appreciating that what you choose to do or not do will impact on the other person and ultimately on your relationship. A healthy relationship includes being willing to give things up, take things on and create shared dreams together. It is tuning into your partner and being thrilled for their successes as well as being there to support graciously when things are tough.

Relationships that work require hard work and committed selflessness from both partners. As we now live in a society where narcissism and competition is promoted at every turn, the chance of creating and maintaining a successful mutual relationship is under threat.

Parents who really love their children will want them to have warm and supportive partnerships in the future. The foundations for this begin early. Families who are focused on their children flourishing in the long term show them in many practical ways that others matter. They expect them to join in with chores around the house because all the family lives there and they are part of a shared endeavour. They encourage them to tune into others – starting with family members. This could include expecting they will enquire how your day has been while you are asking after theirs. Parents who look to their children for occasional support are not emotionally damaging them but setting them up for some great learning about life. It is not outrageous to ask children to give you a hug, to expect your teenager to make you a cup of tea or carry heavy bags! Parents can model how to be genuinely interested in what is happening for other people, and they can teach their children to share, be authentically generous and ask them to reflect on how their behaviour affects others. Parents who also show that they value their children’s strengths of kindness, patience and positive communication will help develop these qualities. All this will make more difference to their lives than their results on test scores at school. Real love is a two-way street: the sooner our children learn this the happier their lives will be.

Sue Roffey is the editor of Positive Relationships: Evidence Based Practice across the World, published by Springer. 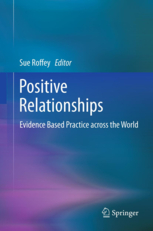 Sue Roffey FRSA FBPsS is a psychologist, academic, author, activist and speaker. She holds posts as Honorary Associate Professor at University College, London and the University of Exeter and Adjunct Associate Professor at the Western Sydney University, and also affiliated to the Wellbeing Institute at Cambridge University. She is a member of the Advisory Board of the Carnegie Centre of Excellence for Mental Health in Schools, and was a member of the Editorial Board of Educational and Child Psychology.